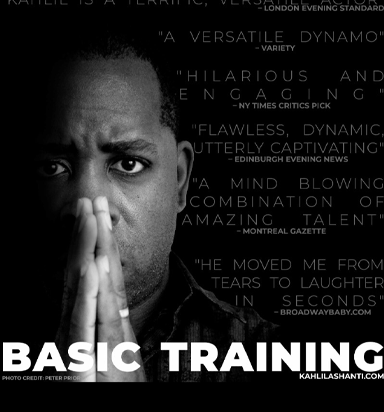 BASIC TRAINING chronicles Kahlil’s stint in the U.S. Air Force, where he was a member of the elite military entertainment troupe Tops in Blue. Playing 23 unforgettable characters, Ashanti delivers a hilarious evening of theater that is extraordinarily funny, completely authentic and surprisingly touching when an unexpected event forces him to revisit a childhood he’s tried his best to forget. Experience this true tale of survival and redemption delivered straight to the funny bone (and your heart!) through Ashanti’s amazing comic and storytelling talent.

Note: This performance is a streaming video as part of the 2020 online-only Denver Fringe Festival.

Kahlil Ashanti is an award winning actor and web developer who started building websites for friends in 1998.  He performed magic in Japanese at Caesars Palace for three years, was selected twice for Cirque du Soleil and is also known for his successful solo show Basic Training (NY Times Critics Pick, Scotsman Fringe First Award) which he wrote, performed and produced.  As an airman in the US Air Force he served in some of the most dangerous parts of the world as a performer on multiple world tours with an elite military entertainment unit called Tops In Blue.  His latest project weshowup.io came as a result of him scratching his own itch when he couldn’t understand why there was no digital equivalent to pay what you want online.  Kahlil learned to code and built the original prototype, which launched in 2019 as a digital pay what you want solution dedicated to audience access, diversity and inclusion for arts, culture and entertainment.  Find out more at weshowup.io or on his official website kahlilashanti.com.

Absolutely fantastic story telling! It took me on this roller coaster of emotions! His characters were thoroughly entertaining and believable. This is the Fringe at its best!

by Beth on Denver Fringe
Stunning

Do not miss this! You won't want to blink while you're watching it for fear you'll miss something. It's a heart-wrenching, hilarious and ultimately redemptive story told in a performance that I will never forget.