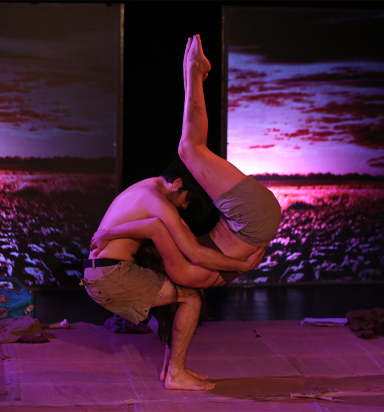 Definition of Man, a post apocalyptic post-modern decreation myth one-act play enjoyed an oversold run during Hollywood Fringe and was nominated for multiple awards including Best World Premiere and won Best of Fringe in Dance & Physical Theatre, the “Ripest Show” sponsored Award from Cherry Poppins, and an Encore Producers Award. At Edinburgh, they enjoyed a successful twenty-one show run that critics called a five-star “unmissable” production (everything-theatre.co.uk) where the “quality of Award-Winning Definition of Man writing, thought and performance going into the show...is a pleasure to see” (thescotsman.com). Audience members are invited to participate in a brief post-show discussion. We would love to hear from you. Let us know how the show has affected you. If it has brought something up inside you and you feel comfortable sharing it, we'd love to hear it. It will be moderated by co-artistic director of DConstruction Arts, Jane Rose. Regional premiere.

Note: This purchase gives you access to the livestream Zoom performance as part of the 2020 online-only Denver Fringe Festival.

For her writing of Definition of Man, co-creator, co-star and writer Nikki Muller advanced to one of 24 semi-finalists out of 374 submissions in The Playwrights Realm’s 2016-2017 Writing Fellows Program and received a nomination for the Inkwell Playwright’s Promise at the 2017 Hollywood Fringe Festival. She previously co-wrote two musicals with the improv team Robot Teammate and the Accidental Party. As an undergraduate at Princeton, Muller received the Fagels Prize for her Creative Thesis in Comparative Literature and the Francis LeMoyne Page Award from the Department of Theatre and Dance. She received her M.F.A. at the Institute for Advanced Theatre Training at Harvard University, studying at the American Repertory Theatre and the Moscow Art Theatre School, where she first trained in Russian partner movement and counterbalances, which inspired the physical element of the play, and is currently a company member of Sacred Fools Theatre.

Co-creator and co-star Jason Rosario is a Los Angeles-based actor who works regularly in television and film. His work in Award-Winning Definition of Man Definition of Man sprung from his desire to return to his theatrical roots, craving something emotionally and physically challenging. In the play, he draws from his personal experiences growing up in Puerto Rico and incorporates a dexterous muscularity acquired from years of martial arts training. Rosario is also an amateur Muay Thai fighter and competes regularly.

Director and movement choreographer Tavi Stutz has worked as a director, actor, dancer, writer, aerialist and yoga instructor on both the East and West Coast. In New York City he performed at the Roundabout Theater Company, at Broadway Dance Center, and with the SITI Company. Tavi also studied at Harvard and through this connection was invited to Moscow by the Bolshoi Ballet to train with them and to take gymnastics lessons at Dinamo. He also taught movement to college students at MXAT and to Harvard graduate students. Upon returning to America, Tavi began performing with the Cirque du Soleil, eventually settling in Los Angeles, where he continues to work in television, circus, film and theater, and is co-founder of his own non-profit, DConstruction Arts, which focuses on multimedia and movement performance.

Co-director JJ Mayes has been working in the L.A. theater community for the past 16 years. In addition to directing Definition of Man during the Hollywood Fringe Festival in June 2017, he produced this year’s Best Comedy winner, Easy Targets. He is currently a member of the Sacred Fools Theater Company and an associate member of both Theatre of Note and the Burglars of Hamm. He served as Co-Artistic Director of Sacred Fools for 3 seasons and has produced and directed 8 shows for them. The shows JJ has either directed or produced have won a total of 24 local theater awards: 7 Garland awards, 5 Ovation awards, 5 LADCC awards, 5 Stage Raw awards, and 2 L.A. Weekly awards. In 2013 he was chosen by the Los Angeles Award-Winning Definition of Man theater community to sit on a committee of volunteers to write the bylaws for what would eventually become the Theatre Producers League of Los Angeles. JJ was subsequently elected to serve on the League’s inaugural Leadership Committee.

An original score and soundscape for Definition of Man was created by Chris Thomas, a seasoned composer of both cinematic and orchestral scores. Chris has won awards for Best Soundtrack at SXSW film festivals, Best Film & TV Music at the World Music Awards, and the Gold Medal Prize from the Park City Film Music Festival. In 2010, Chris wrote music for the documentary, Woman Rebel. The film was short-listed for an Academy Award and nominated for an Emmy Award. He was also nominated for Best Orchestrator at the Academy of Film & TV Music Awards in Hollywood. In the concert world, Chris orchestrated and arranged large works for the Los Angeles Philharmonic and Master Chorale’s Easter Celebration at the Hollywood Bowl. He recently collaborated with the Invertigo Dance Theatre, featuring the quirky Sugar Plum Jam at the Dorothy Chandler Pavilion in Los Angeles. His own works have been performed and recorded by the Hollywood Studio Orchestra, Northwest Symphony Orchestra, Rose City Chamber Orchestra, University of Southern California Symphony, Angeles String Quartet, Los Angeles Doctors Symphony Orchestra, Fear No Music ensemble, Willamette University Chamber Choir, Oregon East Symphony, A-Sharp Youth Symphony and various American festival ensembles.

Powerful, moving, and so topical with what is happening in our world today. This show resonates on so many levels. Don't miss your opportunity to see it!

I really love this show