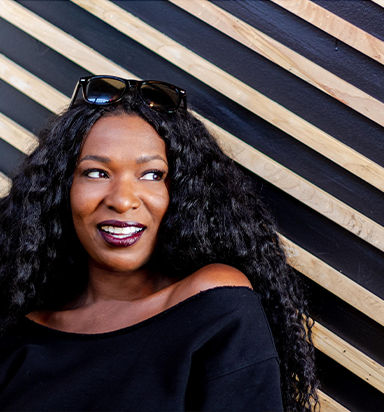 From South Central with Love

30 minutes of live stand up comedy and video written and created by Denver Colorado comedian Janae Burris. The show features some of Janae’s favorite stories about her hometown South Central swirled with her ever critical musings about everyday life in 2020. It takes a lot of energy to be a downer about every little thing and for Janae @negativenegro is not just her handle, it’s her lifestyle.

Note: this purchase gives you access to the livestream Zoom event as part of the online-only Denver Fringe Festival.

Janae Burris (Just For Laughs/NBC First Look) is a comedian, actor and event host in Denver Colorado. She is a South Los Angeles native and a California Institute of the Arts alumna. SInce moving to Colorado Janae has worked with Local Theater Company, Colorado Shakespeare Fest & The Denver Center for Performing Arts. She’s opened for comedians Michael Che, Roy Wood Jr., Beth Stelling and Josh Blue to name a few. Janae has performed at Just For Laughs Montreal, Portland’s Bridgetown Comedy Festival, Limestone Comedy Festival in Bloomington and High Plains Comedy Festival in Denver. She is a Comedy Works Pro and was crowned Comedy Works New Faces Champ in 2016. Most recently Janae was chosen to receive a grant through Spotify’s Sound Up Podcast Bootcamp and is currently workshopping her podcast Dead Daddy Issues.