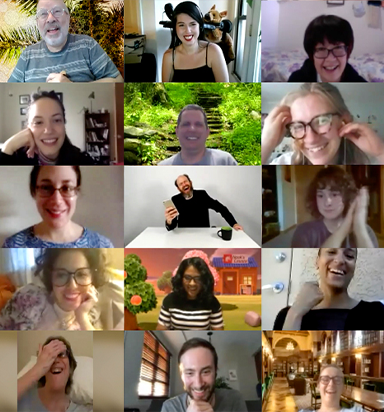 The best show you’ll write all year, ‘#txtshow (on the internet)’ is a completely interactive two screen performance, featuring a mysterious character named txt (pronounced “text”), who recites dialogue written anonymously in real-time by a live audience (on the internet). This LIVE, interactive performance takes place on Zoom. “This online pandemic world we live in is NOT favorable to theater events. While parking is cheaper and you can bring your own beer, there’s no sense of audience or shared discovery. But if you MUST do a show online, ‘#txtshow’ might be the archetype.” – Ink19.com. Regional premiere.

Note: This purchase gives you access to the livestream Zoom event as part of the online-only Denver Fringe Festival.

Brian Feldman (Concept/Performer) is an award-winning performance artist and actor. He lives in Washington, D.C. where, as DCist noted, “In a city that has an advocacy group exploring how to “make D.C. weird” – and is still struggling – Brian Feldman is a shining beacon of eccentricity.” Brian’s work has been favorably compared to Marina Abramović, David Blaine, John Cage, Christo, Marcel Duchamp, Tehching Hsieh, and Andy Kaufman, and garnered worldwide media coverage on television, radio, in print, and online. Since 2003, he has presented 300+ performances of 125+ projects at 175+ venues and festivals through Brian Feldman Projects, one of North America’s premiere presenters of experimental, time-based art. This is Brian’s first performance in Mountain Time in a decade, and his first-ever performance in The Centennial State.

Genny Yosco (Screen Manager) has loved theater since she was a child, and it’s been a steady decline into madness ever since. Since 2014, she has produced and directed 34 productions in New York, 26 of which have been originals that she has written. She also is the creator and director of two monthly shows – ‘SILENT BUT DEADLY: A Mime Experience,’ in which she also plays Blue; and ‘CHEMICAL X: The Powerpuff Girls Improv Show,’ where she portrays Bubbles and various others. On top of all of this, her company Sour Grapes Productions has been a resident company of FRIGID New York since 2018. When she’s not over-exerting herself with theater, she’s doing about the same with her short film projects.

FLAAAAGELLLLLS! I'm so sick of zoom meetings. I think this is a wonderful way to have an interactive theatrical experience. #txt did not just recite, but EMBODIED what we typed in. DO IT and bring friends!

Absolutely bizarre concept but A LOT OF FUN. Would definitely participate again and see if the audience can work together to work on a cohesive story!

by Herbert on Denver Fringe
Weird, but fun!

I didn't really know what was going on, but I still had a great time.

by Jed on Denver Fringe
A hilarious, interactive show that works perfectly online!

As the artist says, it's the only show that you write and anything goes! It's fun to see what audience members are willing to write under the veil of anonymity ... and to watch the "mysterious character named txt" speak or act out anything and everything that you submit. Highly recommended!

It was like watching someone act out all the random thoughts that pop into their head over the course of an hour, only we were the ones putting the thoughts in their head. Dinosaurs, self-abuse, pussy (cats), and all sorts of other topics came up. You can make the show whatever you want since you get to write it live and the actor reads it. So, I guess you could say there were some really deranged individuals in the audience!